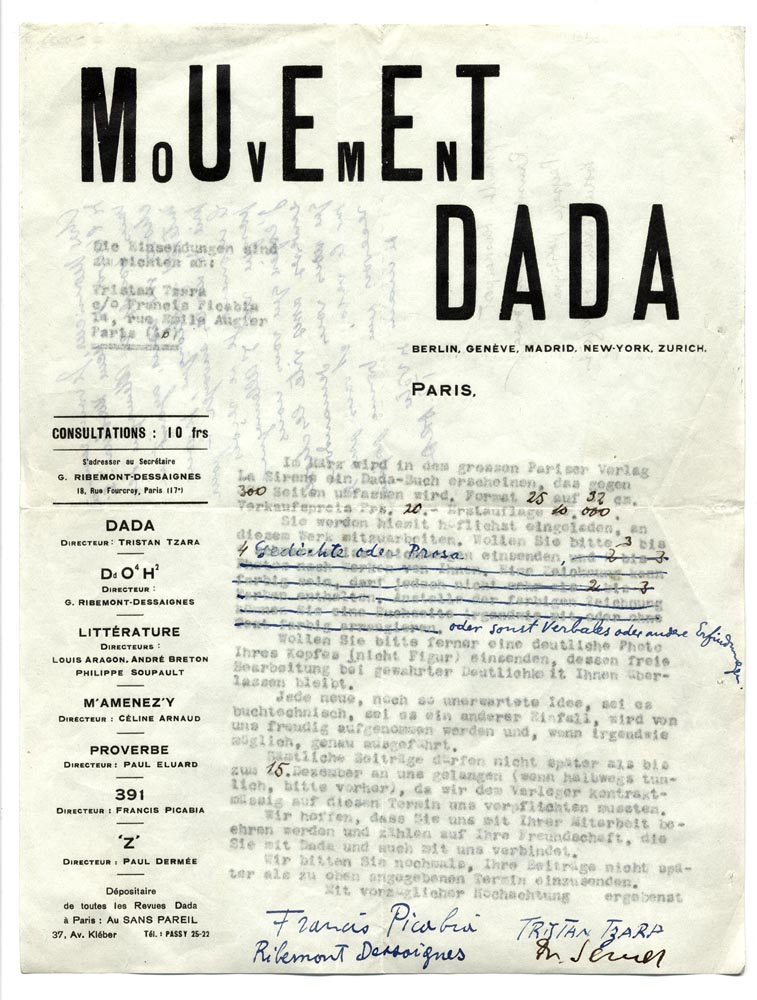 In the fall of 1920 in Paris, Tristan Tzara, poet and co-founder of Dada, embarked on an epic project to compile an anthology of works created by an international group of artists aligned with his avant-garde movement. Tzara’s goal was to print 10,000 copies of the book and call it Dadaglobe. Unfortunately, his ambition far exceeded his fundraising talents, and as a result, the project, slated for publication in 1921, never reached completion.
Tzara—with help from his friend and fellow Dadaist Francis Picabia—had written to 50 artists from 10 countries asking them to submit artworks to be considered: these could be photographic self-portraits, photographs of art, original drawings, designs for book pages, prose, poetry, and other verbal “inventions.” Over the course of the year Picabia’s apartment had become jam-packed with correspondence.
Now, following six years of archival research by Dada scholar Adrian Sudhalter, many of those fragments of the never-realized whole have been assembled for the exhibition “Dadaglobe Reconstructed,” on view at the Museum of Modern Art in New York. The display might be seen as either the remnants of an unrealized project or as Dadaglobe’s original intention finally coming to fruition.
Among the fragments on display is Max Ernst’s pioneering work of photomontage, Die chinesische Nachtigall, The Chinese Nightingale. It is both a photograph of a sculpture set on a lawn and a collage work. The sculpture depicts an anthropomorphic bomb (used by the British in World War I) with a pair of outstretched arms and a piercing eye—a portrait of distress.
“Had it been published in 1921, Dadaglobe would have recorded the activities of Dada at its climax and before its decline,” as Jeanne Brun wrote in the catalogue to French curator Laurent Le Bon’s 2005 Dada exhibition at the Centre Pompidou. The failure of Dadaglobe, according to Brun, seemed to lay in the “incapacity” of the Dada movement to have its “essence . . . congealed in one single publication.”
One wonders whether Tzara grasped the complicated nature of his endeavor from the start. Apart from financial issues, personality conflicts, too, also contributed to Dadaglobe’s demise. Was Tzara perhaps a bit naïve in believing that so disparate a group could achieve such a cooperative feat? Or, maybe, Tzara always suspected that Dadaglobe was destined to exist less as a Dada-defining publication than as a provocation.
Jean Cocteau, for instance, wrote above an image of himself in Self Portrait on Pablo Picasso’s Horse, “I’m not a Dada, but I’ll amble in your book.”
By bringing these pieces together, “Dadaglobe Reconstructed” represents the long-term ripple effect of the creative explosion triggered by Tzara’s invitation. More than chronicling what Dada was, these pages reflect the artistic freedom that Dada would inspire for years to come.
Another page, Portrait of André Breton at Festival Dada (with Picabia placard) is a photograph of Breton with his head poking out of the top of a sandwich board. He offers a playful sideways glance as his right hand points toward a large bulls-eye and the accompanying text (translated from the French), which otherwise obscures the bulk of his body, reads, “In order to love something you need to have seen it or heard it for a long time you bunch of idiots.”
Copyright 2016, Art Media ARTNEWS, llc. 110 Greene Street, 2nd Fl., New York, N.Y. 10012. All rights reserved.

THE DAILY PIC (#1585): “Dadaglobe Reconstructed” is precisely the kind of show that the Museum of Modern Art should be doing, and very often has done of late. Memories of “Bjork” have pretty much been erased by an absurdly full roster of utterly unpandering projects.

For “Dadaglobe,” curators have labored to unearth a vast trove of material once intended for what was supposed to have been the ultimate anthology of the Dada movement. The book was planned in detail by the Romanian avant-gardist Tristan Tzara, in Paris around 1921, but a lack of funds torpedoed it late in the process. All that remains are Tzara’s detailed records and the art works themselves that he’d meant to include, which MoMA has tracked down in surprisingly large numbers.
Today’s Pic is one of my favorite objects from the Tzara project, and from the MoMA show, because it does such a perfect job of summing up modern art’s love of the new, and its disdain for those who resist it. An unknown photographer has captured a dandified André Breton, not long before he helped found the Surrealist movement, at the great Dada festival in Paris in 1920. For the occasion, Breton has put on a placard designed by Francis Picabia, bearing a target-like abstraction and the words “For you to like something, you have to have already seen and heard it for ages, you bunch of morons.”

Among other things, the placard’s concentric circles make an important point that we’ve lost sight of: Abstraction, in its first years, always came with an edge of Dada absurdity to it – and maybe still ought to, if it’s to keep its original heft. Jasper Johns, another target-maker, knew this; Kenneth Noland should have. Perhaps the utter sobriety of early pro-abstract manifestos was meant to counteract any remaining odor of Dada.

I can’t help feeling that Breton is quite literally and deliberately making himself a target of jokes, with the text that he bears as the disdainful rebuttal of a voiceless martyr. (The sacrificial effect is helped by the fact that he has centered the target on his gonads.)

Breton’s silence makes sense of another element in the photo, and in Tzara’s entire book project, that I’m not sure has been much noticed.

He is holding a copy of the very letter that Tzara sent out to solicit contributions to his Dadaglobe anthology. The sheet bears a carefully designed letterhead that reads MoUvEmEnT DADA, with the alternating large-and-small type that I’ve echoed here. The thing is, for any native French speaker who looks at this photo, or even at the Dada letterhead itself, the large capitals, along with the disappearingly small letters between them, can only make that mouvement read as muet – “silent” or “mute.”

Dada was a noisy movement, for sure, and its artists enjoyed making a ruckus. But for all its deliberate absurdity, it had a space of focus and concentration at its core – as witnessed by the close-mouthed withdrawal of Breton in this portrait.

Dada pretended to be all about anti-art, but its artists knew perfectly well that in the process they were engaged in making great art, in the same lineage as Leonardo and Rembrandt and other makers of the telling and silent tableau.

For a full survey of past Daily Pics visit blakegopnik.com/archive.