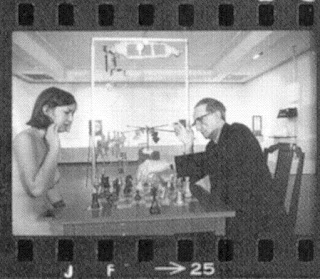 Marcel Duchamp and Eve Babitz playing chess during the Duchamp retrospective at the Pasadena Museum of Art in 1963. The photograph by Julian Wasser is reprinted in numerous places, including West Coast Duchamp, Bonnie Clearwater, ed., Grassfield Press, Miami Beach, 1991, p. 75, fig. 34; additi onal photographs of the scene, including a page of Wasser's contact sheets, are on p. 73, fig. 33 and p. 75, fig. 35. Dickran Tashjian discusses the circumstances of taking the photograph on pp. 71-74 of his article "Nothing Left to Chance: Duchamp's First Retrospective," pp. 61-83 in Clearwater. Duchamp is shown with this photograph in Ugo Mulas, New York: The New Art Scene, Holt, Reinhardt, Winston, 1967, p. 74 and studying it on the endpapers of Sur Marcel Duchamp, Calvesi, Izzo, Menna, et al., Fremart Studio, Naples, 1975. Eve Babitz was twenty years old when the photograph was taken. Unlike the also faceless subject/object of Étant Donnés, and perhaps casting a strange sort of multiply refracted light on that work, Babitz has a voice. She went on to design album covers (Buffalo Springfield Again, Atlantic Records, 1967), write novels (Slow Days, Fast Company: the World, the Flesh, and L.A., Alfred A. Knopf, 1977, Sex and Rage: Advice to Young Ladies Eager to Have a Good Time, A Novel, Alfred A. Knopf, 1979, L. A. Woman, Simon and Schuster, 1982), write stories (Black Swans, Alfred A. Knopf, 1993), and write essays (Eve's Hollywood, Delacorte, New York, 1974, Two by Two: Tango, Two-Step and the L.A. Night, Simon and Schuster, 1999, and various magazine articles). She gives her account of the photographic session in "I was a Naked Pawn for Art : Being a True Account of the Day Marcel Duchamp Put the West Coast Underground on the Culture Map by Playing Chess in Pasadena with the Author, Who Was at the Moment an Unclothed Young Woman with a Lot to Learn," Esquire, Vol. 116, No. 3 (September 1991), pp. 164-74. A much shorter version, with some additional photographs, "Marcel Prefers Nudes," appears in Craig Krull, Photographing the L. A. Art Scene 1955-1975, Smart Art Press, Santa Monica, 1996, pp. 40-45.
Steven B. GERRARD. « A Pun Among Friends »
by http://www.toutfait.com/issues/issue_3/Notes/gerrard/gerrard.html

The photograph of Marcel Duchamp playing chess with a nude Eve Babitz has become one of most iconic images of the French artist. In a gallery filled with his works, a well-dressed, gentle-looking Marcel sits opposite a young, voluptuous woman. Her face retreats behind her bangs but her posture is composed and comfortable, and Duchamp himself does not seem to care that his opponent has no clothes on. Behind them is “The Large Glass," or “The Bride Stripped Bare by her Bachelors, Even,” and a number of other significant pieces that fade into the background. The nude and the elderly artist beg to be viewed as another piece of art in the gallery; the viewer remains bewildered and indecisive, however, about how to approach the photo as a whole. It was the perfect portrait of Duchamp and Los Angeles.

According to Babitz’s 1991 Esquire essay “I was a Naked Pawn for Art,” her photo-op with Duchamp was actually more of a capricious, attention-seeking young-adult stunt than an artistic statement. Here's what happened: A massive retrospective exhibition of Duchamp’s art was held at the Pasadena Art Museum in 1963. Everyone important was invited to a private viewing, yet Babitz, though she was friends with curator Walter Hopp, was not. Later, at the public viewing, Time photographer Julian Wasser, her younger sister’s date to the private viewing, suggested it would be a fun idea for Babitz to pose naked playing chess with Duchamp. Young, reckless and dying to get revenge on Hopp for his earlier snub, the twenty-year-old Babitz jumped at the opportunity.

The next morning, Wasser photographed Babitz playing chess with a very old, very polite and very un-L.A. Duchamp. The shoot itself lived up to neither its hype nor its legacy. Wasser spent ages fixing the lights and Babitz arrived at the gallery dressed in “nunlike severity.” She tried not to think about her stomach, which was puffed up due to the birth control pills she was taking, ran to get dressed soon as Wasser finished the shoot, and succeeded in confronting Hopp. That was all.

Wasser was already driving around Hollywood with a police radio in his car in 1963, and he went on to become one of the most successful celebrity photographers of the 20th Century. Babitz became an acclaimed writer who published books and novels about L.A. culture, but she is now more than anything remembered as the naked woman who played chess with Duchamp.

Today, Babitz’s literary reputation is borderline nonexistent: all her books are out of print and difficult to find even at libraries. Of the three books Stanford holds, one is held in a non-circulating collection on Californian history, and the other two are buried in “SAL3,” the Stanford Auxiliary Library. A Google search of “Eve Babitz” yields a slew of reproductions and humorous (and awkward) parodies of Wasser’s photo, a few obscure graduate dissertations, blog posts by serious bookaholics, as well as the Myspace page of an British indie goth-pop band called “All About Eve Babitz.” She doesn’t even have a Wikipedia page.

However, once upon a time she was the epicenter of everything Los Angeles. She was neither a celebrity nor a wealthy heiress, but it seemed as if everyone who was anyone was somehow magically connected to Eve Babitz. Besides being friends with the aforementioned Walter Hopp, the legendary curator whose gallery hosted the first solo show by Andy Warhol, she was the daughter of an L.A. Philharmonic violinist, and eventually became the goddaughter of a certain visiting musician named Igor Stravinsky. She was one of Ed Ruscha’s “Five girlfriends of 1965” and she also unapologetically slept with Jim Morrison. And through the sheer serendipity of her meeting her sister's date, the media-savvy, impulsive Julian Wasser, Babitz finally and for posterity became the nude girl who played chess with Duchamp.

Ironically, the world of Eve Babitz’s writing could not be further from European manners and intellectual French Modernism, and deserves recognition in its own right. It would be a slight stretch to admit her into the canon of great 20th century American writers, but her work definitely packs more punch than that of many writers with Wikipedia pages. Her essays and novels present a city populated by alcoholics, fame whores and Scientologists, a glamorous Sodom without a sense of history and an enforced moral code, whose only oases of any form of purity were vegan, natural food stores decorated in Indian wallpaper and frequented by yoga jocks and sex addicts. These were atheist and political people who worshiped Frank Sinatra and Elizabeth Taylor and believed that “fascism is worse than what Oedipus did to his mother.” L.A. was admittedly messy, weird and sinfully delicious; Babitz was not afraid to love every bit of it.

Certainly, versions of Babitz’s L.A. can be found in works of a dozen other writers, but unlike Joan Didion or Nathaniel West, Babitz does not attempt to critique L.A. She acknowledges that “what educated people from the East Coast and England take one look at [LA] and think is what is wrong with this place,” but she has no desire to fix it. Writing in a style that is a mix of David Sedaris and Lauren Conrad or Chelsea Handler, she is observant, witty, tactful, efficient and daring. After reading Tolstoy, Austen, Dickens and Camus, she concluded that “the point of these book as far as I, a bleached blond teenager growing up in Hollywood, was concerned was that though the authors thought they were so smart--being from England and the East Coast and so well educated and everything--they were suckers for trashy cute girls who looked like goddesses and just wanted to have fun.”

Occasionally she dives into intricate, poetic descriptions or introspective streams of consciousness, but for the most part she is the immensely biting and practical writer who chose to attend L.A. Community College “because you could park, unlike at UCLA.” To Babitz, a flat stomach is worth more than the “tenets of Western Civilization that try to convince us there are higher things,” which “always seemed to [her] just a handful of dust.” The towering necessity of a svelte figure over higher philosophy is thoroughly and nakedly explored in many of her essays, and she does not care if the reader disagrees. Perhaps her biggest flaw is that she succeeded so beautifully in writing records of a disposable culture that her writings became a part of it, and were themselves forgotten as the world she describes vanished and was replaced