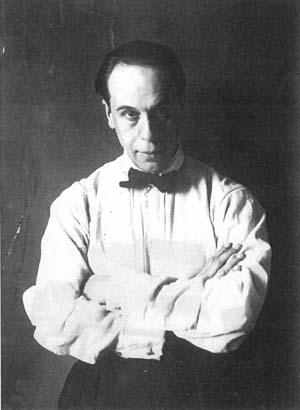 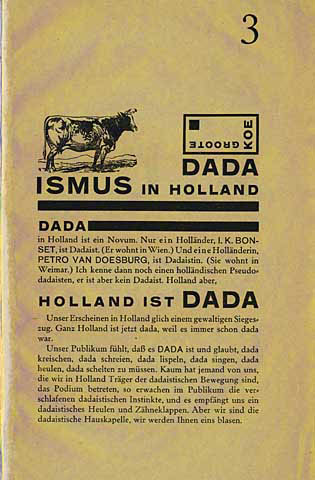 Tate Modern’s superb exhibition, Van Doesburg and the International Avant-Garde is the first major UK show to be devoted to the Dutch painter, architect and writer. This vast survey casts the spotlight on an artist frequently overshadowed by his co-founder of the De Stijl movement, Piet Mondrian. Theo van Doesburg made a distinctive contribution to the avant-garde in his plastic expression of the fourth dimension – time. Whereas Mondrian aspired towards total stability in his Neo-Plastic paintings, van Doesburg strove for dynamism in his use of the diagonal. He built bridges across the disciplines of painting, architecture, design, poetry and typography while re-inventing himself in multiple roles through a continual process of “becoming”. Not only was he the editor of the little magazine De Stijl, but also a Dada personality, a Bauhaus teacher and a proponent of Art Concret. Above all, he was a brilliant facilitator, as seen in the swirling mass of connections that unfolds in this kaleidoscopic exhibition.

The latest instalment in a Tate Modern series charting aspects of early Modernism via artistic exchange, the show results from a timely collaboration with the Stedelijk Museum De Lakenhal in Leiden, where van Doesburg began his career. In the first gallery, a mystical spiritualism shines out of the darkness in the pupil-like Cosmic Sun (1915), an ode to Kandinsky. Soon circles fall apart, dissecting the picture plane in homage to the father of cubism, Cézanne. The geometrical assemblage that floats across the canvas in Composition I (Still Life) (1916) marks a turning point in van Doesburg’s path towards abstraction. The next year he would transfigure a cow into an arrangement of blocks. His affiliation with Mondrian sparked his rapid progress: together with Bart van der Leck, Vilmos Huszár, Georges Vantongerloo and others, they launched De Stijl in 1917. The group’s journal would become a platform for constructing a modernist network across Europe, in quest of a Gesamtkunstwerk (total artwork) – it published a manifesto calling for progressive artists to “work for the formation of an international unity in Life, Art and Culture”.1 With the signing of the Armistice on 11 November 1918, they signalled the dawn of a new consciousness through a universal means of expression. The movement advocated the use of an elemental vocabulary of the straight line, the square and the rectangle in architecture, industrial design and urban planning, in order to effect societal change.

Van Doesburg made a key contribution to the development of De Stijl’s Neo-plasticist language through the method of abstraction he applied to his stained-glass windows. First he derived a motif from nature and then he broke up the image into multiple parts before re-integrating them into a whole design through patterns of repetition, reflection and rotation. The results appear in Stained-Glass Composition IV for the De Lange House, Alkmaar (1917) – a tripartite window coloured with a mosaic pattern, drawn from the study of a seated woman, calling to mind Bach’s fugues. The compositional method would open up a lively relationship with the environment, transforming van Doesburg’s outlook on architecture. Fascinated by motion, he assembled floating planes in space to express the fourth dimension of time. This creative approach emerges in the maze-like design for the tiled floor of De Vonk holiday home in Noordwijkerhout (c1917–18), a collaborative project with J.J.P. Oud. The chaotic dynamism of the pavement forces back the appearance of the interior walls, as though to “neutralise gravity”,2 in the architect’s own words. He theorised the art of building in the Principles of Neo-Plastic Art (1919), identifying an active element, mass, and a passive one, space. In a revised edition for the Bauhaus, where he propagated the “New Spirit” in 1921–22, he qualified “the elementary means of expression of architecture”, in terms of the positive elements of line, plane, volume, space and time, and negative elements: void and material.3 However, it was not only in architecture that he engaged with the concept of movement: he ran with the idea in his painting, graphic design, poetry and film.

Before leaving for Germany in 1920 van Doesburg produced a revolutionary expression of space-time, Composition XVIII in Three Parts. The artist intended for the pyramidal arrangement of paintings to compose a single whole, but its externalised centre met with Mondrian’s criticism. Yet the innovation succeeds in drawing the eye to the passage of a white cube, as it moves across the trio of canvases. Van Doesburg’s graphic design reflects this displacement: a layout of overlapping words enables a simultaneous reading of the poster for the international Cubist artists’ group show La Section d’Or (1920), where he exhibited Composition XVIII. Meanwhile, the cover design for the text of his lecture Classic, Baroque, Modern (1920) features a diagonal alignment of “Baroque”, which contravenes the static orthogonal grid associated with Neo-plasticism. As sole editor of the magazine De Stijl, van Doesburg engaged in a dialogue with Constructivist artists from abroad to communicate his dynamic vision of typography. For a special issue entitled Of 2 Squares (1922), based on the Suprematist children’s storybook charting the relationship between the fourth dimension, time, the three dimensions of the book and the two dimensions of the page, the Russian artist El Lissitzky produced a cover of soaring letters and shapes. This evoked a playful sense of freedom and a desire for flight, qualities that inspired van Doesburg to explore Futurism and Dadaism.

As editor of De Stijl, he published the seminal Call for Elementary Art, urging the artist to be “the interpreter of energies that shape the world’s elements”.4 In a bold move, he assumed the name of an experimental artist, I.K. Bonset, displaying a skill for deconstruction in the final statement of his first text: “SPACE/AM I”.5 The words mark a “splintering” of the self – a process that allowed him to escape traditional values and embrace the anarchic non-sense of Dada. In this vein, he published sound poems, set up a Dada convention at Weimar in 1922 and initiated a Dada tour in the Low Countries the next year. He improvised a Dada-Constructivist review Mécano, with whimsical texts and images scattered across primary-coloured paper, a counterpoint to the clean-cut austerity of De Stijl. The yellow issue featured paintings by Man Ray, articles by Tristan Tzara and poetry by Kurt Schwitters – who created an animated form of Dada, “Merz”. The blue issue was a showcase for the Hungarian artist László Moholy-Nagy, who wrote of his fascination at discovering the real identity of I.K. Bonset in Weimar. True to form, van Doesburg staged a surprising rapprochement between the Dadaists and Constructivists. “Life is an extraordinary invention,”6 he said.

Van Doesburg inspired cross-disciplinary practice in the Zurich Dadaist circle, which altered the direction of Neo-plasticism. The fusion of scroll paintings modelled on the Japanese makimono format and the syntax of music was a catalyst for experimentation. Viking Eggeling's Diagonal Symphony (1920) and Hans Richter’s Rhythmus 23 (1923) reveal sequences of colours that hold the potential to create the kinetic movement of film. But van Doesburg’s abstract language would soon take a new turn. From 1924 to 1927, he adopted a fresh approach, resulting from his theory of Elementarism, his rediscovery of axonometric projections and his oblique compositions for the University Hall in Amsterdam. The diagonal grid now underpinned his aesthetic, signifying a spatio-temporal tension in the monochromatic Counter-Composition VI (1925). When coloured by dissonant tones, his grids resonate with chords of energy, as in his mural scheme for the Café Aubette’s cinema-dance hall in Strasbourg (1926–27), devised in collaboration with Dadaists Sophie Taeuber and Hans Arp. Nearby in the gallery is the wooden furniture of Gerrit Rietveld, whose eloquence inspired van Doesburg to make the “unenclosed spatial relationship” the rule of “architecture as the synthesis of Neo-plasticism”.7 Rietveld’s Red-blue chair (1923) is among the iconic objects that populate the exhibition, weaving a rich context for understanding De Stijl’s human-made order.

Later, when living in Paris, van Doesburg created freeze-frame imagery: he achieved the illusion of a continuous state of motion by curtailing shapes at the canvas edge of Simultaneous Counter-Composition (1930). He re-evaluated his aesthetic in The Basis of Concrete Art, hinting at the manifesto’s radical nature with his suggestion of infinity in Arithmetic Composition (1929–30). Yet after his untimely death in 1931, he was remembered for his ability to gather the art world in a moment, under the diagonal sign. De Stijl contributors published a memorial issue with van Doesburg’s name emblazoned diagonally across the cover, rising in an upward trajectory. It is telling that a month before he died he wrote of a desire for rest and a hope to create the “style of the whole man”.8 For to recognise van Doesburg’s legacy is not only to appreciate his universal approach; it is to glimpse his singularity, as an artist who amused with his Dadaist act, and as an architect of lightness, who designed floating planes of time. With more than 400 objects and an illustrated catalogue featuring essays on multiple aspects of his life, this Tate Modern exhibition is the place to encounter new dimensions of Modernism.