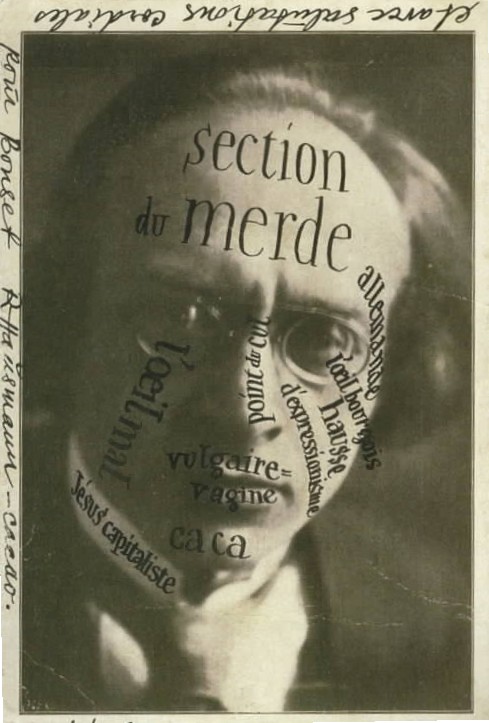 Why? Who is the German philistine that he should be upset by dadaism? It is the German writer, the German intellectual who explodes with rage because his formally perfect schmalz-bread soul has been left to bake in the sun of ridicule, who fumes because he has suffered a direct hit to the brain, which in his case is located where he sits—and now he has nothing to sit on! No, do not attack us, gentlemen, we are already our own enemies and know better than you where we are vulnerable. Understand at last that your positions are a matter of utter indifference to us, that we have other things to worry about. Use your energies to beat only the drum of your own intellectual business, pound about fiercely only on your own bellies, until a god takes pity on the sound—we have long since cast this old drum aside. We play, squeak, curse, laugh our irony:

There you have~lt! Spare yourselves your fingers worked to the bone and stitch up your ~3 torn traps. You have done it all for nothing! That you could not put us up against the wall, we take solemn note of that. It makes us want to wash out your intestines and present you with the balance of your solemn values.

After an enormous thinning of vital feeling in aesthetic abstractions and moral-ethical farces, there rises from the European soup the expressionism of the German patriot, who took a respectable movement started by the French, Russians, and Italians and fabricated a small, profitable war industry in an endlessly plump enthusiasm. The hurdy-gurdy of pure literature, painting, and music is being played in Germany on an extremely fit business footing. But this pseudotheosophic, Germanic coffee klatsch, which got as far as achieving recognition among East Prussian Junkers, should be a matter of indifference to us here, just like the businessman's machinations of Mr. [Herwarth] Walden, a typical German philistine who believes it necessary to wrap his transactions in a Buddhistic-bombastic little cloak. To the honor of his business genius, but send his aesthetic and his artistic Prussianism back to where they came from, the office of the shady lawyer. Were Walden and his writers' school revolutionary in the slightest, they would first have to comprehend that art cannot be the aesthetic harmonization of bourgeois notions of property.

Oh my gentlemen philistines, you say that art is in danger? Yes, do you not know then that art is a beautiful female form without clothes, that she counts on being taken to bed, or that she instigates the action herself? No, gentlemen, art is not in danger—art no longer exists! It is dead. It was the development of all things, it wrapped even the tuberous nose— and piggish lips of Sebastian Muller with beauty. It was a beautiful appearance, departing from a sunny cheerful feeling for life—and now nothing elevates us any longer, nothing! /483/ Give up sexual romanticism, my gentlemen writers—we are no longer in the mood; better you should show your beautifully tatooed bellies, spit words, splash some geometry in colors and call it abstract art—that is just as acceptable to us as your tightrope walk all around expressionism! The absolute incapacity to say something, to grasp a thing, to play with it—that is expressionism, an intellectual Preißnitz compress for decayed entrails, some jello putrid from the start and the cause of a solemn stomachache. The writing or painting philistine appears to himself properly sacred in the process; he finally expands somehow beyond himself into an indefinite, general blah-blah—oh expressionism, you universal turn in the romantic capacity for lies! But it is only the Activists that made the farce unbearable, who wanted to bring the spirit and the art that they perceived in expressionism to the people. These feeble minds, who somehow once read Tolstoy and of course did not understand him, are now dripping with an ethic one can approach only with a dung fork. These fools, who are incapable of engaging in politics, have invented this etheristic Activist marmalade to expand the market for itself, in this case among the proletariat. But the proletarian, if you will forgive me, is not nearly so stupid as not to recognize a fruitless tempest in a teapot. Art to him is something that comes from the bourgeoisie. And we are anti-dadaists to such an extent that when some fellow among us wants to exhibit something beautiful or aesthetic—a securely bounded good little feeling—we will knock his well-smeared sandwich out of his hand into the garbage. For us the world today has no deep meaning but that of the most unfathomable nonsense; we want nothing to do with spirit or art. Science is silly—quite likely the sun today still revolves around the earth. We advance no ethics, which always remain ideal (a swindle)— but that is why we do not want to tolerate the bourgeoisie, who hang their moneybag over the existential possibility of man like Geßler does his hat. We wish to organize the economy and sexuality rationally, and we do not give a hoot for culture, which was no tangible affair. We wish an end to it and with it an end to the philistine writer, the manufacturer of ideals that were nothing but its excrement. We wish the world moved and movable, disorderly instead of orderly—away with all the chairs, away with feelings and noble gestures! And we are anti-dadaists because for us the dadaist still possesses too much feeling and aesthetics. We have the right to every amusement, whether in words, in forms, colors, noises; all of this, however, is splendid idiocy, which we consciously love and manufacture—an enormous irony like life itself: the precise technique of nonsense definitively conceived as the meaning of the world!

Down with the German philistine!