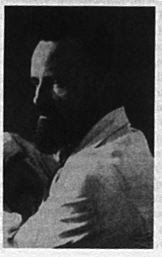 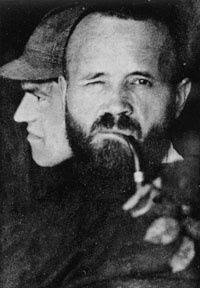 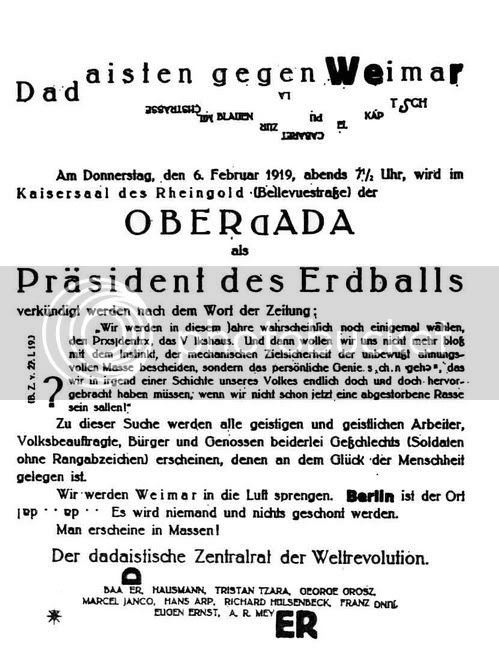 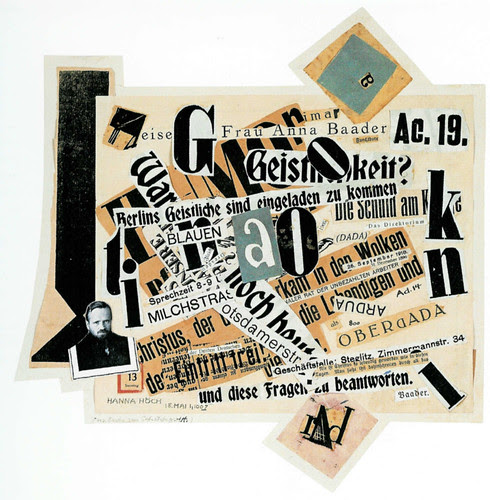 Johannes BAADER. Der Verfasser des Buches Vierzehn Briefe Christi in seinem Heim, 1920, collage, 21,6 X 14,6, New York, The Museum of Modern Art
In this photomontage, Baader presents a photograph of a domestic space in which various Dada ephemera hangs on the wall at upper left. A figure has been cut out of the center of the photograph to reveal the image of Baader's dummy exhibited at the Berlin Dada Fair in 1920. This work is, in fact, a sophisticated self-portrait of Baader in his persona as the "Oberdada," a parody of a high-ranking military figure (ex. Oberleutnant) of the Dada "troupes." The figure cut out of the upper photograph can be identified as Baader himself, as his reflection is visible in the mirror at the right edge of the cutout.
http://www.moma.org/collection/browse_results.php?object_id=35877 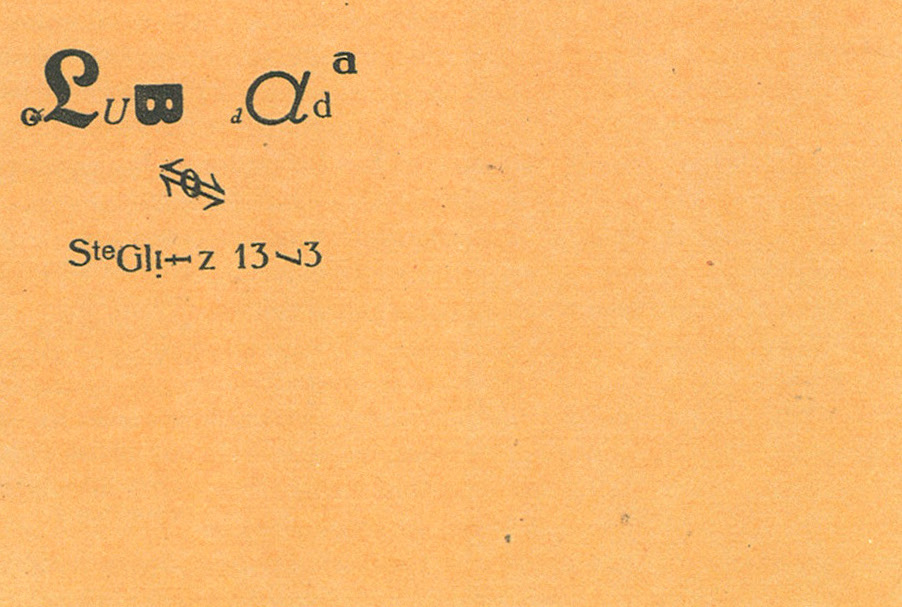 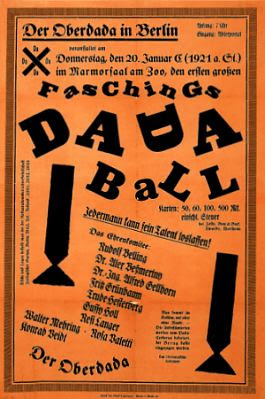 Men are so necessarily mad that it would only be madness by another name for them to be sane.

Dada is the dancing spirit atop of the world's morals ... Dada is not an axiom ... Dada is a state of mind independent of all schools and theories, one that addresses individuality itself without doing violence to it ... One cannot understand Dada ; one must experience it. Dada is immediate and obvious. If you're alive, you are a Dadaist.

Huelsenbeck’s anti-definition will frustrate those who wish to put Dada into a little box. But Dada does not classify easily. It consciously invites misunderstanding and confusion and it does not have an evident manifesto, though its adherents produced several. Huelsenbeck is right to be abstruse and open with his anti-definition. How could a movement formed by the quiet, reflective Hugo Ball, the Napoleonic Tristan Tzara and the derisively mouthy Huelsenbeck be axiomatic? How could such an orderly movement ever contain someone like the Oberdada ?

The Oberdada was Johannes Baader, or so he claimed.
Who was Baader ?

Walter Mehring, a fellow Dadaist, believed him to be “without doubt the most noble and sublime individual in our midst.” Hans Richter, another friend, said that “he resembled a stick of dynamite blasting itself to pieces. Richard Huelsenbeck disagreed, calling him “a bearded potato-ascetic,” “an architect or tailor’s apprentice or assistant hairdresser, at any rate a bourgeois fool,” and “an unbearable mixture of mendicant friar and petit-bourgeois.”

The German authorities tended to side with Huelsenbeck since they certified him insane. This was excellent news for Baader who found sanity to be rather stigmatic ; unconstrained by the chains of fine mental health, he could do exactly as he chose.

For most of us life is a conciliation between our pleasure-seeking instincts and the voice of Reason. A revolutionary tries to subordinate this authority, this Reason, to the individual will. But for Baader, only the will existed. For all that Huelsenbeck said that he was an egotist, it appears that he didn’t have an ego. He didn’t need to, since for him there was no force that could repress his wildest desires. He probably was indeed psychotic, an idealist caught at the junction of Eros and Thanatos, unsure which route to take. To paraphrase Marx, he was in terror of himself in order to give himself courage. Dada became his perfect outlet.

He was born in 1875, in Stuttgart. At the age of 17 he went to study at the city’s trade school, and graduated to the technical college three years later. At 28, he began working as a mortuary architect in Dresden, and at the age of 30 he met Raoul Hausmann, another Dadaist, in Berlin. By 1916 when, in the words of Hans Richter, Dada became “a storm that broke over the world of art as the war did over the nations in the midst of war”, Baader was 40, much the oldest of the Dadaists.

Nevertheless, a chronological approach to Baader’s life is difficult – all the more difficult, since he apparently died twice.

Baader was first pronounced dead on 1 April 1919 from a stroke, aged 43 or so. His comrades at Club Dada prepared an epitaph, and concluded that it was a great shame he wouldn’t be able to make the forthcoming Eighth Zurich Dada Evening. But for many years, Baader had been telling people that he was Jesus Christ (and several other personages besides) – and perhaps he was, for the next day he was reborn. To celebrate this miracle, Baader introduced a new calendar – the Calendar of World Peace. It was not widely adopted. One could claim that Baader did not die from a stroke at all in 1919, and that his subsequent resurrection may not have brought about the calendar of world peace.

One could claim that world peace was inaugurated when Baader first opened Teacher Hagendorf’s Reading Desk that same year. This desk made him his fortune, enabled him to see how silly Socialism and Communism and Nationalism were, and meant that Baader, now quite loaded, was able to bring down world capitalism, which of course brought about world peace. One could claim this – and in fact Baader did, saying afterwards :

The world owes it all to Teacher Hagendorf’s Reading Desk, and also to Oberdada, President of the Globe and Heavenly Sphere, Director of the Last Judgement, True Privy Chairman of the Intertellurian Oberdadaist League of Nations in DADACO.

King of all Dada, Jesus Christ, high-priest of all the world and the universe beyond, arbiter of eternity : it is clear that Baader’s important role in history has been somewhat overlooked. Two more stories about Baader will enlighten us further. The first is very instructive, for it hints at Baader’s power of prophecy (eighty years before Baudrillard, Baader described the first world war as “a newspaper war – in reality, it never existed”).

By 1930, long after Baader first told people he was the Messiah, Germany had becoming full of people claiming to be Christ. One of these characters with a messianic complex became rather powerful in that country soon afterwards. Anyway, a Congress of Christs was organised in Thuringia to determine which one really was the Messiah. Hausmann’s companion Vera Broido-Cohn takes up the story :

The Christs seemed to sprout like mushrooms. A meeting of them was organised in a large meadow near a town, and Baader did a fantastic thing. As he was a journalist, Lufthansa had offered him a pass which enabled him to make whatever trip he wanted, free, if he went to an important rally in Germany. He called the company and asked them if he could be brought to Thuringia and set down in the middle of the meadow. It was accepted.

All of the people at the rally stood up and formed an enormous circle. Each Christ went to the middle, and behind him came all of his supporters. The spectators pushed from behind and then all eyes went up to see Baader descending from the sky. He landed, then went away. They saw his face, and were rendered speechless.

The second story is told by Hausmann in his Courrier Dada. It takes place in Friedenau in 1918, on the 100th birthday of the Swiss novelist Gottfried Keller. Hausmann and Baader were waylaid in the town’s streets, breathing in the tranquil evening sun. Baader had brought a copy of Keller’s Der grune Heinrich along with him and celebrated they read it.

Without wasting a word, we made for the middle of the street and stood under a powerful electric street-light, high – too high – in the air. We took out the tome and began to read, shoulder to shoulder. ‘Poetry, made to measure, on the spot.’ We took turns to open the book at random and read scraps of sentences with no beginning and no end, changing our voices, changing the rhythm and the meaning, leafing backward and forward, spontaneously, without hesitation and without a pause. This gave the whole thing a new meaning and produced some remarkable juxtapositions. We did not notice the passers-by ; we certainly noticed no sign of public interest. Zealously we stuck to our task for at least a quarter of an hour. The words of the book, illuminated by our exalted mode of speech, borne up on the wings of our elation, tormented by new associations, took on a meaning beyond meaning and beyond comprehension.

It was a very good celebration, with all due solemnity, and I am sorry it was not filmed. But talkies did not exist in those days.

What one would give even for a photo. But, a photo or a talkie would have necessitated staging, and this was not a staged event. There was no audience, nothing was on show, and no record of the reading – save Hausmann’s own account – exists. It does not exist as a work of art – nut how much harder it hits you than something framed in a gallery.

Some time after Dada’s heyday, Walter Mehring was in Hamburg, and decided to look up his old friend. “I discovered that he was still around, occasionally tacking up the length of the Binnenalster and sleeping there. But no one, not one sea-dog, nor the hoariest husky in the Hagenbeck Zoo, knew his address.” Many years earlier Baader, as a young architect, had designed part of the Hagenbeck Zoo, in which the animals ran free. He often said he would liked to have designed something similar for humans – only humans are too wild.